A SCIFI MMORPG, with extensive lore and tokenized economic system. Five races and three factions fighting for control of the galaxy and its resources. 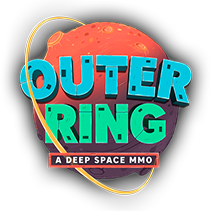 What is Outer Ring

Mix old school systems (Ultima Online or Meridian 59) and newer and more diverse concepts including blockchain technologies and NFTs brought from games as disparate as Planeside, SMITE or AXIE Infinity to achieve a perfect balance.

We believe that some MMOs have been designed with the goal and desire to appeal to all gamers, all of the time, we believe the future of MMOs is all about making games, targeting specific gamers niches. We also want to attract all casual gamers and those interested in the real economy and blockchain that powers Outer Ring.

We’ve called it “The player driven MMO” because community is a very important part of development. They can collaborate on public forums in different languages ​​and affect the development of the game.

Not only that, but in game, systems such as the economy, the creation of cities and the laws will be directly linked to how players interact with the different worlds and systems that make up the game, thus creating a living ecosystem.

We believe in the principle that everything in the game should be influenced by the actions of the player, nothing should ever be static and immutable.

Why did you call it “the player driven MMO”?

How does the economy work?

The in-game currency is the Exocredit (EXO), which is also INGAME’s currency and a native token that is traded on some third-party exchanges, as well as the Galactic Quadrant (GQ), the game’s premium currency and native governance token. In addition, all natural resources and materials used for construction and equipment creation are subsidiary tokens that can be traded on the game’s own DEX.

All in-game items can be obtained with the INGAME currency.

All items in the Auction House and Player Stores must be purchased with INGAME currency, but all items on the NTF market can be priced in Exocredits (tokens), Galactic Quadrants (GQs) and other cryptocurrencies, and the player decides in which currency they want to pay.

We aim to create a living economy, where all types of players have a place.

Being a free game, how is it possible to maintain the service?